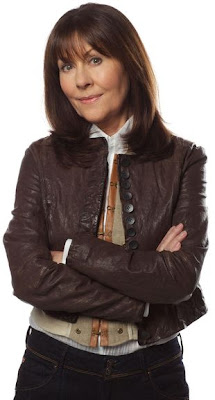 The news of Elisabeth Sladen’s death came as a shock to me and I’m sure many others who were unaware of her illness. She’d still looked so full of life and vitality in recent episodes of the Sarah Jane Adventures, and the years had treated her well (usually a sign that someone has treated themselves well). She was the Doctor Who companion whom I had grown up watching, and so had a special place in my heart, and that of my generation. The companions are always the point of audience identification in Doctor Who, the Doctor himself being, of necessity, a somewhat aloof and strange presence. Katy Manning’s Jo Grant was a hard act to follow, having pretty much spanned the Jon Pertwee era and provided the definitive companion to his Doctor. Elisabeth Sladen, along with producer Barry Letts and script editor Terrnce Dicks, managed to create a character who was sufficiently different in attitude and manner, creating the necessary distance from Jo’s scattily endearing persona, and signalling a new era for the series. Sarah Jane Smith (the Smith surname indicating a certain everywoman aspect) was curious, assertive and resourceful, but also vulnerable and sometimes overly impetuous. She represented the new face of feminist strength whilst also frequently finding herself in old-fashioned positions of cliff-hanging peril – a difficult balancing act to pull off. Sladen managed to convey the complex mixture of bravery and fearlessness which didn’t preclude a healthy and sensible sense of fear. Her mastery of the tremulous voice and apprehensive look acted as the perfect expression of the audience’s pleasurable terror. 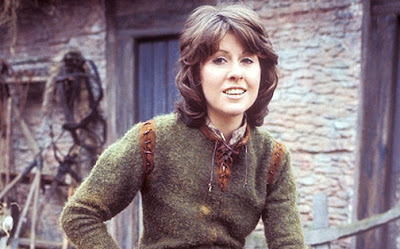 Sarah Jane in the beginning - The Time Warrior, 1973

Sarah Jane’s first adventure was The Time Warrior, its first episode broadcast on the 15th December 1973. She is presented as a journalist posing as her Aunt Lavinia, a scientist, in order to gain access to a scientific research centre which, as UNIT’s presence attests, is experiencing an outbreak of weirdness. Sarah stumbles into a Middle Ages past, and Sladen plays the comic aspects of her misapprehension of the nature of her surroundings very nicely. She believes for some time that she is in the middle of some historical re-enactment. Her encounters with the full-blooded chauvinism of block-headed robber baron Irongron (who goes through the whole panoply of goblet-thumping medieval actor techniques) is also an instant challenge to her emancipated outlook, and one which she rises to admirably. It boded well that the first alien creature she encountered was a Sontaran, which would go on to be a recurring foe, and one with enough staying power to become a ‘classic’ monster, making it through to the current incarnation of Who. There were some other enjoyable episodes with Pertwee (Death to the Daleks is an enjoyable quarry based adventure, with the embodiments of ruthless evil rendered temporarily impotent) but it was difficult to escape from the shadow of Jo, something which was particularly apparent in the Monster of Peladon, which was a pale shadow of The Curse of Peladon, to which it was a belated sequel. Unlike Jo, however, Sarah did make it to Metebelis 3 in Pertwee’s last adventure, Planet of the Spiders (just released on dvd, at last).

It was in the Tom Baker era that Sladen really came into her own. This started off with Robot, first broadcast on 28th December 1974, an enjoyable if far from classic adventure in which Sarah Jane develops a touchingly empathetic relationship with the tin-plated title monster, finally playing Fay Wray to its giganticised behemoth in the last episode. Sarah was put through her paces in these stories, often finding herself split off from the Doctor and having to fend for herself. She poses plays the investigative journalist once more in Robot in order to infiltrate a quasi-fascist cadre of scientists. She undergoes an agonisingly claustrophobic crawl through the air vents in The Ark in Space, with the threat of coming up against a squirming green slime grub around every corner (definite shades of Alien here, and in the story as a whole, some four or five years before that came out). That uncomfortable claustrophobia was repeated in a scene which haunted me as a child. In Planet of Evil, she was confined in a coffin-like box alongside the Doctor, which was to be ejected into space. The captain of the spaceship pressed the button and the boxes began to glide towards the exit ports. In Genesis of the Daleks, she turns revolutionary, and organises a rebellion against the Kaleds in the missile silo where she has been consigned to hard labour. Her climb up the scaffolding towards the missile head, bullets ricocheting around her, is a particularly memorable scene. In The Brain of Morbius, she is not only left alone, but in a state of temporary blindness. This leads to perhaps one of the most terrifying cliffhangers in all Who. Sarah blinks as her sight finally begins to come back to her. Joyfully declaring ‘I can see’, she turns tentatively around, only to be confronted with the hideous creature that has just arisen from its laboratory table: a patchwork amalgam of shaggy beast with giant insect pincer and brain in a fishbowl head.

Sarah Jane’s relationship with Tom Baker’s Doctor developed into a lovely double act. She grounded his eccentricity, refusing to take him entirely seriously, and there was even a sense that she was gently mocking his character at times. She could also provide a counter-argumentative voice, as in the classic exchange in Genesis of the Daleks, one of the central examples of the series strong moral core. Sarah Jane urges the Doctor to join the connective wires which will destroy the nascent Dalek race in its hatchery, but he hesitates, agonising over whether he has the right to commit a monstrous act in order to destroy a monstrous force. There were a couple of occasions on which Sladen had to play a Sarah who wasn’t Sarah. In The Android Invasion, there is a great scene in which the Doctor realises that she has become something other. Calmly telling her ‘you’re not the real Sarah’, she stumbles over and her face falls off, revealing the clockwork mechanisms beneath which are driving this replica. Sladen’s playful side really comes to the fore in her final adventure, The Hand of Fear, which begins in a quarry which really is a quarry. In this story, she becomes possessed by a long dormant alien being, and calmly walks into a nuclear power station, brushing aside all who get in her path with an impishly delivered assertion that ‘Eldrad lives’. In non-possessed state, her relationship with the Doctor is also at its most playful and teasing, and it’s a fine way for her to make her exit from the series. The final parting is beautifully underplayed. When she tells him not to forget her, he simply says ‘oh, Sarah’. It’s something neither he, nor the audience, could ever do. And there she, is left on the pavement of Hillview Road in South Croydon, although, just before the famous music crashes in, she wonders whether this is where she is at all. 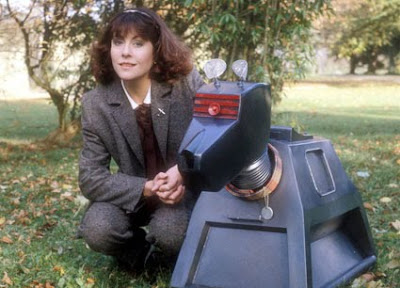 It wasn’t to be the last of Sarah Jane, of course. She returned on 28th December 1981 in K-9 and Company, an underrated offshoot ill-served by its regrettably risible title sequence. This was in fact a very enjoyable tale of rural occultism set in the imaginary village of Moreton Harwood where Sarah had gone to visit her Aunt Lavinia. She teams up with her aunt’s young charge Brendan to crack the mystery of a coven which makes sacrifices to the Goddess Hecate. In a bizarre way, it anticipates the Simon Pegg and Edgar Wright film Hot Fuzz. It’s a real pleasure seeing Sarah Jane as an active heroine in her own right, and her protective, maternal relationship with her young sidekick anticipates the later Sarah Jane Adventures, in which she is also a mature and self-assured single woman who also plays the role of guardian. The Sarah Jane Adventures were hugely enjoyable as well, and offered the chance for re-unions or first meetings with the Brigadier, Jo Grant and David Tennant and Matt Smith’s Doctors. Sarah Jane had returned in the Tennant episode School Reunion, and Sladen beautifully conveyed the painful re-awakening of feelings which had lain dormant but which had never really gone away – a combination of sadness and joy, happiness and regret. Her presence elevated an episode whose surrounding story was less than wholly engaging. It was really good to have her back. The Sarah Jane Adventures was a particular pleasure in that it offered a mature female heroine, someone who was still at the heart of the action (and quite capable of joining in) but able to bring the wisdom of age and experience to bear. We need more of her kind.
Posted by Jez Winship at 10:44

Email ThisBlogThis!Share to TwitterShare to FacebookShare to Pinterest
Labels: Doctor Who, Elisabeth Sladen