We now see the deckhands working, with an ominous looking hook on the end of a chain suspended amongst them. As Finn indicates that a wind is building up, Tom tells the Captain that he will secure the hook to make it safe, but is twice rebuffed from on high (the Captain looks down on the deck from an upper gantry). His reasoning is that this will mar the fresh paint, and he likes ‘a neat ship’. This is an indication of his obsession for maintaining absolute order, down to the smallest detail. As the night falls and the wind builds in strength, the hook begins to careen dangerously out of control, and the Captain finally gives the direct order to secure it, again from a position safely above the fray, conveying his command through a megaphone. The hook describes a wildly swaying and unpredictable course amongst the sailors, who dodge beneath and to one side in an attempt to hook it with a tethering rope. With its new coat of shiny black tarry paint, it looks like the chitinous claw of a giant insect. This is the ship turning against its inhabitants, the tools used against the users. This will happen throughout the film. Objects used as weapons are always those designed to aid shipboard labour. Their dual use shows how the constructive can swiftly revert to the destructive, particularly when people become divided and cease to work together.

Later, at the officer’s table, the Captain anticipates Tom’s objections with a pre-emptive explanation of his inaction. He refers back to his comments about the moth and claims that he has a right to do what he will with the crew ‘because their safety depends on me’. He claims that he is prepared to put himself at risk for their safety, although his removal from the arena of danger in which Tom himself was fully involved makes this a rather hollow assertion in this case. He cites the undermining of his authority as his reason for denying Tom’s requests to fasten the hook, passing the blame on to him for asking the question in the first place. With such linguistic sophistry, he uses words to create a post-facto justification for his actions. Already, the connection between word and deed is beginning to break apart. This gap is further forced open when he is indecisive over making an incision when the Greek needs an emergency appendectomy. Tom takes over and carries out the operation successfully and not a word is spoken about the Captain’s failure. Tom and Sparks (who had been relaying medical instructions via the wireless) make a pact of silence at Tom’s suggestion. Tom is still sympathetic to the Captain, but Sparks speaks contemptuously of how he will come out with ‘one of those talks he gives on authority’. The intellectual sees through the seductive mesmerism of persuasive language, put is not prepared to challenge the hollow authority which it propagates.

The Captain, after remaining incommunicado for a while, invites Tom into his quarters to explain his actions. It is almost as if he has been summoning the words in the intervening period, composing and rehearsing his speech. He tells him that he is ‘not afraid of anything but failure’, which is in effect a fear of being revealed to himself. The shell of words and rhetoric composing a rigid world view would then shatter and reveal the hollow spaces which they have been encompassing. He goes on to say that he didn’t do the operation because it wasn’t something he knew about. This suggests that he no longer has the capacity to absorb information, to expand upon his view of the world. As his name, Stone, suggests, it has become ossified, intransigent. The authority to the maintenance of which he has become obsessively dedicated has turned him into a monadic figure, detached and shut off from the world and therefore unresponsive to its signals. His response is to try to warp the world to respond to his limitations, to draw it into the oppressively heavy gravity well which surrounds his weltanshauung. The Captain re-iterates his line about Tom being ‘the man for me…a man who’d think like I think’. Tom no longer looks so entranced. The glamour of the Captain’s dictums is beginning to wear off. 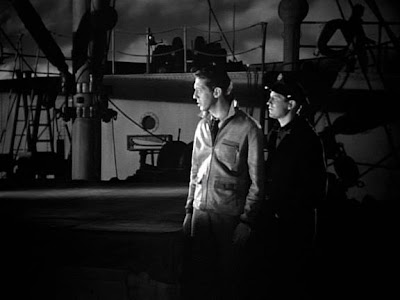 On deck with Sparks

Nonetheless, when he meets Sparks, he has evidently convinced himself to give the Captain the benefit of the doubt again, reminding him of their pact of silence. Sparks observes that ‘he’s a smooth man with the words, the Captain’. When Tom continues to stick up for him, Sparks alludes to his (Tom’s) isolated childhood which has made him vulnerable to the blandishments of such an authoritative father figure, but warns that ‘there’s a friendliness that tries to get you to thinking wrong’. This is the false companionship which we’ve encountered in The Seventh Victim, the company of lost souls. It’s a relationship which seeks to reproduce and proliferate a philosophy which will spread out into the world, sweeping up the isolated and powerless with its reassuring certainties, then using them for its own ends.

On deck, Sir Lancelot sings the old shanty ‘Blow the Man Down’. There is a poetic rhyming here with the recurrence of the song which we first heard the blind man sing on the docks. The associational link with blindness is carried over into the close up of the measurements being made on the nautical charts. The rational dividing of course and distance is immaculately observed by the officers, but the underlying forces of irrationality which are emerging in the ship’s power structure are ignored. As the crew take a break, they are informed that the Captain is not happy with the cleanliness of the deck; ‘the Captain wants a clean ship’. The same obsession with cleanliness which was put above the safety of the crew. The constant cleansing of the ship is an external manifestation of the mental cleansing the Captain applies to himself, expunging any considerations which sully the purity of his central conceit, the driving force of his hunger for absolute, unquestioned authority. To this extent, the crew’s cleaning of the ship amounts to a self-administered brainwashing, an acquiescence to the demands of authority whatever they might be, even if they lead to their own destruction. They are led to believe that the will of Authority (or the Captain) is the will of Fate.

Finn’s still, moonlit face is shown as another moment of punctuation. He looks across the ship and out to see, his pockmarked face, thrown into shadowed relief, making him look like a weatherworn figurehead. He seems to be awaiting something, looking out for something on the horizon. It is a look which portends death. On deck the following day, Louis, after a bout of griping, is encouraged as a dare to put the point he has been making about the need to put into port when the crew is short to the Captain. When he agrees, Finn, toying with his knife (the tool which can become the weapon of offence or defence) looks downwards, as if in sad recognition of the sealing of a fate. The Captain’s response is one of indirect, or passive aggression as he calmly states that ‘there are Captains who might hold this against you’. His contained rage at the questioning of his authority is expressed in the snapping in half of his pencil. Louis, we sense, is a man whose time is marked. 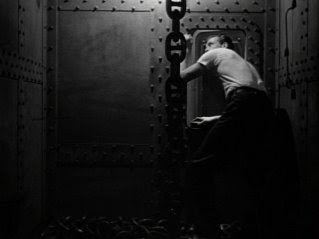 Trapped in the Chain Room

As he cleans the chain in the anchor room, the Captain walks past and shuts the door which allows him egress. It is an act of completely casual opportunism. He is walking past and sees the chance to determine Louis’ fate and does so without a second thought. This reflexive action is the enactment of the philosophy which he has been expounding. He is the agent of fate and has the self-determined right to be so according to his dictum about having power over the lives of his men. The thick links of the chain coil down about Louis, increasing in pitch and volume as it grows shorter outside and drowning out all his cries for help. The man who has tried to assert his rights under law is buried in chains. This is almost like an exaggeratedly cruel visual pun on Marx’s famous exhortation ‘workers of the world unite! You have nothing to lose but your chains!’ Here again, the mechanisms of the ship are turned against the crew and prove to be the means of their death. Whilst not as upfront and obvious as it is in Battleship Potemkin, there is definitely a point being made about class oppression here. The crewmen are destroyed by the tools and mechanisms with which they work. And they conspire in their own subjugation by failing to unite and challenge the tyrannical authority which cares so little about their wellbeing. 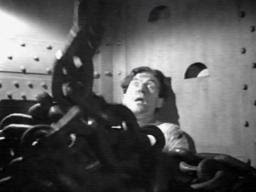 ...You have nothing to lose but your chains

When Tom opens the hatch and discovers Louis’ body, he is immediately confronted in the corridor by the Captain who tells him to ‘get that cleaned up’. He makes no distinction between the men and the elements of the ship which they operate. When Tom points out that this was a human being, he coldly responds ‘he was a troublemaker’. ‘Death is so absolute’ he declares with Nietszchean loftiness of a psychopath. The problem of dissent has been dealt with quickly and efficiently. This is Tom’s moment of epiphany, the revelation of the truth behind the seductively intoned rhetoric. ‘This is what you meant when you said you had rights over the lives of the crew’ he says with accusatory disgust. Abstract philosophy has become concrete, as Nietzche’s epigrammatic grandstanding morphed over time into Nazism. Words which have a hypnotising cadence and a promise of noble intent are translated into ugly action which was there between the lines all along.

But Tom’s attempts to reveal what he has discovered about the Captain’s philosophy of absolute power and his application of it fall on deaf ears. The inertia of established hierarchies swiftly exerts itself, the need to maintain positions which have been attained over time paramount over other concerns. The First Officer dismisses him out of hand and Sparks doesn’t want to know. ‘I like my job and I want to keep it’ he states with disarming self-interest. He maintains the non-involvement which he has demonstrated before, the disengaged intellectual reluctant to leave the tower of his learning. The ship approaches the island of St Sebastian, possibly the same one on which the action of I Walked With a Zombie took place, with Sir Lancelot singing a celebratory calypso. In such sunny climes, and with the prospect of shore leave ahead, Tom’s warnings stand little chance of being heeded. Like St Sebastian himself, he is a lonely outsider, isolated and viewed with contempt for beliefs which he refuses to relinquish.
Posted by Jez Winship at 12:29