The London Nobody Knows... 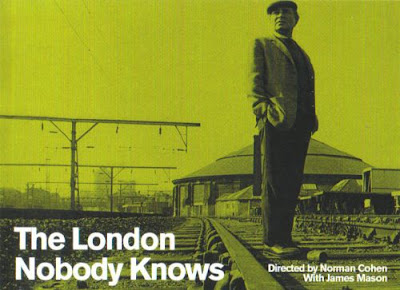 …Because most of it has now disappeared. This film from 1967 captures the capital on the cusp of major transformation. It concentrates on the crumbling remains of the Victorian warrens around Camden and Spitalfields, through which we’re guided with unrufflable suavity by James Mason. But it begins with a montage, set to music of the requisite fabness, of the new high rise buildings springing up all over the city. But this film is no lament for the past. It is fascinated in the remnants which still exist, but well aware that many of the houses and areas into which it ventures are unfit for human habitation.

James Mason, in tweed suit, checkered flat cap, well polished brown brogues and a stick which doubles as a useful pointing device, finds himself in some quite rough environs. At the start he is in the Bedford Theatre in Camden, which looks like it might collapse around him in an avalanche of plaster at any minute. Mason’s is the perfect voice for Fletcher’s tart, sardonic and unsentimentally reflective words. Here he muses on the music hall era to which this space was witness. A stage upon which Marie Lloyd strutted her stuff, and boxes in which the painter Walter Sickert sat sketching the theatrical world for later paintings. There are precious few reminders of this central aspect of Victorian London culture left, which makes it all the more imperative that a place like Wilton’s Music Hall should be preserved whilst its still standing. The National Trust are apparently dithering over whether to fund this fascinating treasure of popular entertainment history, a hesitancy which I’m sure wouldn’t be at issue were this yet another stately home under consideration.

James is also to be found treading the sleepers in the disused sidings behind The Round House. It is typical of this film that it is uninterested in the zeitgeist happenings for which the Roundhouse was famous at the time (I believe Jefferson Airplane played there), rather focussing on the relics of the Victorian railway era which can be unearthed by the keen eye. The Roundhouse is of course still there, having recently re-opened as a major concert venue, where its foundations were recently challenged by several nights of sonic assault by My Bloody Valentine. I went there a while ago to see a sound art installation by Brian Eno and Mimo Palladino which transformed the dank basement into a murkily primordial scene with reptilian creatures crawling out of the shadows and Eno’s generative music ebbing and flowing in intersecting fragments from various hidden speakers.

Moving to the East End, the film captures the Spitalfields area as it is divesting itself of the last traces of its Jewish immigrant character. The Yiddish theatre, in front of which the Salvation Army are playing, is clearly on the verge of closing down. Synagogue steps are the home to a temporary gathering of brawling tramps. The Jewish fresh food market seems to be doing a roaring market, however, and has the genuine air of serving a community (a reflexively overused word these days) with a final request for gefilte fish, which is something you don’t hear every day. James wanders down a couple of street markets, casting his eye over what’s on offer and nodding an occasional polite ‘good day’ to passersby who no doubt recognise him from somewhere or other. The street hawkers are showmen whose ready patter is probably turned up a notch for the cameras. The people here are far from the denizens of swinging London, some specimens of which we have seen in all their purple frippery and brightly buttoned Edwardiana. Some of the younger market traders have the fashionable haircuts of the era, but in general you get the feeling that this is what things were really like outside of a small coterie for whom everything was hip and happening. For everyone else it was Val Doonican. The streets around here are filthy, and when we are shown the debris-strewn back yard in which one of the Ripper victims met her end, we receive a sudden jolt as James tells us that some people around here still remember those times. Parts of this area really are still unchanged from Victorian era. These are the kind of slums which Gustave Dore depicted in his engravings of London published in 1872. 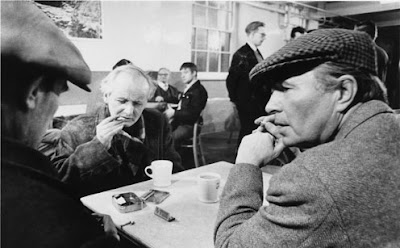 The film doesn’t shy away from showing the lowest depths of poverty and hardship. James takes tea in the Salvation Army hostel and talks with unpatronising ease to some of those down on their luck. But the point is made that beds here still cost a nominal sum per night, and not all can afford even that. The director turns the camera’s gaze on several tramps and seems fascinated by their ravaged faces, lingering to try to draw the humanity from the grime-filled lines. This is uncomfortable but somehow not exploitative viewing. It reaches an almost unbearable pitch when we hear an old man (maybe not so old) relate how he just somehow has never been able to make it, no matter how hard he’s tried. He stands in front of another row of dilapidated terraced housing, and suddenly he starts to sing a heartrending Yiddish song (and they sure knew how to rend hearts) in a surprisingly light and mellifluous voice. We continue hearing this as we see a new housing development and the fresh faces of childen playing in front of it. The effect is as socially didactic as the products of the documentary movement of the 30s and 40s such as Housing Problems and Diary for Timothy.

Geoffrey Fletcher’s books from the 60s showed a fascination for the small and often unobserved details of the cityscape, and the film follows up on some of these. There are the lamps, including a row of gas lamps lit by the last lamplighter in London (now long gone, I presume) and a fine specimen outside the Savoy. I didn’t spot this last time I walked in this area, although I did discover a passage which cuts right through the guts of the hotel, its art deco splendours currently completely covered with screened scaffolding. There are some splendid lavs, as well, including ones whose cisterns were once fishtanks (goldfish are temporarily provided to show how this worked). Elegant bogs seem to be a thing of the past in London now. Last time I walked past St Martins in the Fields, there was an aluminium wall against which you were apparently supposed to pee, with no enclosing walls. What a sign of social devolution! There’s still a classy subterranean Edwardian affair on the edge of Hampstead which I came across when we going to look at the restored Isokon Flats in Lawn Road (a classic piece of 30s modernism which had until recently been left to go to rack and ruin). Long gone are the days when underground lavs were proudly maintained by an attendant such as that played by Charles Hawtrey in Carry On Screaming (sample dialogue: Police Inspector – ‘I must warn you that I will be taking down anything you say’. Hawtrey, with cheeky smile – ‘alright then, trousers’.)

Going south of the river to Southwark, the buildings are still incredibly dirty, particularly given what an affluent area this has now become. A clue as to why may be found when we get a glimpse of the Bankside power station (now home to the Tate Modern) which was still in operation then (indeed, it only closed in 1982). The river is still a working waterway too, filled with barges and tugboats and larger ships beyond Tower Bridge in the pool of London. There’s a scene in Alfie, when he’s earning a few quid taking tourist snaps by Tower Bridge, where you see all the ships docked downriver and realise just how busy the docklands was. There’s a brief comedy sketch at this point, which James introduces rather wearily (perhaps Geoffrey Fletcher didn’t approve). This features an egg breaking factory, where two lab-coated fellows earnestly experiment with different ways to break eggs: hammers, steamrollers, explosives. It strongly reminded me of some of the wackier moments of Vision On (actually that accounts for pretty much all the moments in that freewheeling bastion of creative anarchy) and I found it highly amusing, although I could see how others might find it merely idiotic. 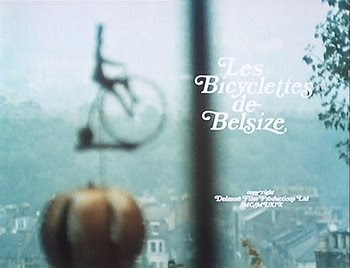 This is a treasury of images for those fascinated by London’s history. It was an inspiration (along with Patrick Keiller’s London, with its similarly sardonic narration) for their album and the accompanying film Finisterre. Indeed, the two films were shown as a double bill on the South Bank. The dvd release comes coupled with a rather enchanting piece of 60s nonsense, Les Bicyclettes de Belsize, a mini musical which unpromisingly centres around a theme song which was a hit for Englebert Humperdink. But don’t let that put you off, he doesn’t sing it here. The opening scenes panning across the rooftops of Hampstead are magical, and summon up the atmosphere of this area perfectly. I’ve always loved walking around Hampstead and Highgate. They have the feel of self-contained villages and yet are on the edge of the sprawl of London. The views over the cityscape are breathtaking and there is the feel of pausing on the brink, as if you have almost reached the goal of your journey and are surveying the world into which you are about to descend. 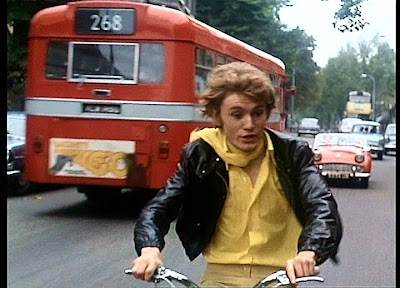 The film is a light and frothy fairy tale with a watered down hippy theme, as interpreted by theatrical types. The main character cycles around on his mini-chopper bicycle (a Raleigh RSW16 apparently, bike-spotters) berating squares for being so uncool as to, like, wait at busstops and go to work to earn bread, man. Why can’t they all be childlike and free, with their gauzy neckerchiefs flowing free in the slipstream, as they nearly kill themselves through reckless cycling in heavy traffic. Incidentally, the picture of our hero being passed by the 268 comes from an excellent site on buses in films, which I urge you to look at.

When our hapless hero, now with a rather sweet little girl in tow, crashes through an advertising hoarding, he instantly falls in love with the woman whose face rises in giant profile above him (Judy Huxtable, who later became Judy Cook after she married Peter). With a certain inevitability, they meet, she is swept away by the trendy Bailey-alike for whom she models, and he pedals his heart out to find her on Parliament Hill Fields. A love song ensues. It’s all charmingly whimsical, and I have a real soft spot for whimsical charm. The director, Douglas Hickox, went on to make Theatre of Blood, a tale of thespian revenge starring Vincent Price which, with its Bankside settings and meths-swilling cadre of feral tramps seems to draw some inspiration from The London Nobody Knows. It was recently adapted for the stage and performed at the National Theater with Jim Broadbent taking on Vincent Price’s mantle. Apparently the soundtrack of Les Bicyclettes will be released on cd by Chapter One records, coupled with, for no apparently good reason, Bernard Herrmann’s score for Twisted Nerve, an undistinguished psychothriller from 1968. A bit random, as they say.
Posted by Jez Winship at 12:31