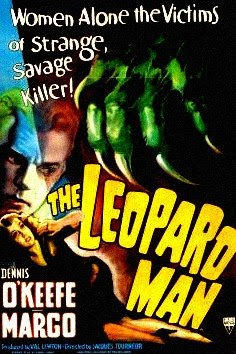 The Leopard Man is not perhaps one of the most successful of the Val Lewton productions, partly because of the unsympathetic nature of the source material, Cornell Woolrich’s novel Black Alibi. Lewton and his writers had previously been given carte blanche within the confines of the lurid titles provided by RKO production head Charles Koerner. But here they were working from a pre-existing story and there was therefore less leeway to incorporate personal themes and concerns. Nonetheless, they did manage to mould the material into a form which exhibits many of the typical Lewton traits, and whilst it is not as resonant as either Cat People or I Walked With A Zombie, it does further explore some of the thematic elements which those films introduced. 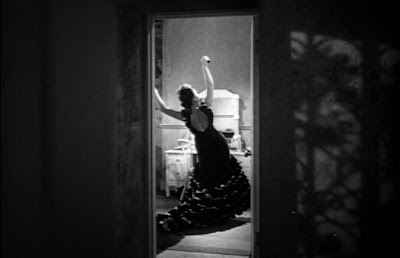 The credits sequence immediately introduces us to the ambience with which the film is imbued; a view of the night street of a small town with the sound of castanets on the soundtrack evolving into a bolero theme. This is the sound of Hollywood exotic, and indeed the camera glides from the dark exterior through a shadowy corridor into a brightly lit dressing room where a dancer practices with her castanets for her nightclub act. This is Clo-Clo, the New Mexican dancer for whom the castanets are a constant accompaniment, always in her hands as if they were a natural extension of her body. They provide a soundtrack for her as she walks along the streets with a confident stride. It is as if she dances through life. Indeed her vitality and ability to incorporate romantic yearning alongside pragmatic realism within an all-inclusive and never cynical worldview make her the central embodiment of vitality and generosity within the film.

In this opening scene, however, we switch to the adjoining dressing room where two American voices disparage this sound, hammering on the wall to try to get her to shut up. One of them, putting on the costume of the cigarette girl, contemptuously says ‘oh, she’s a local’. There is a palpable sense of tension and rivalry in the room. The other woman is Miss ‘Kiki’ Walker, the ‘big star’ at the night club at which we are backstage. Eloise, the cigarette girl with dreams of stardom, makes it quite clear that she is ready and waiting to step into her shoes should she falter at any step. ‘I bet someday you’ll try on my coffin, and I hope it fits you perfect’, Kiki fires off. This rivalry, the sense that you need to be constantly looking over your shoulder, makes the night club a neat microcosm of America as a whole, a walled-off corral within which the values of ruthless individualism, competitive ambition and money predominate. It contrasts diametrically with the feeling of community which exists in the town outside. 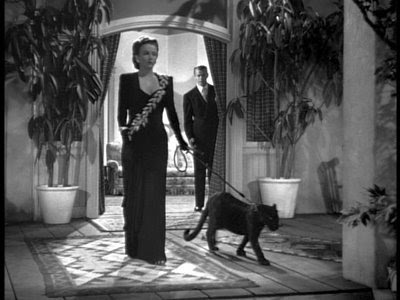 The introduction of the leopard, led in by Jerry Manning, Kiki’s ‘good agent and good friend’, is a symbol of the savagery which lies beneath the civilised airs on display here. Indeed, it’s employment as a tool of showbiz rivalry, to upstage and displace Clo-Clo’s more popular ‘local’ act, puts this symbolism to immediate and explicit use. The leopard is an object which will inspire fear and awe, but most importantly attract attention. It is a way for these American outsiders to impose themselves on the local culture, using one of its totemic creatures. As we learn later from Galbraith, the museum curator, the jaguar and cats in general represented for the Indian indigenes ‘a personification of force and violence’. Kiki is clearly nervous about using this tool of aggressive force, but makes her choice. She chooses a black dress over a red one, ‘then I’ll be just like him’ (indicating the leopard), a creature serving its own needs and hungers, at the expense of others if need be.

In the courtyard of the night-club, the camera focuses on the fountain which is at its centre. This is the film’s symbolic object, the equivalent of I Walked With A Zombie’s statue of Saint Sebastian, and as with that meaning-drenched object, it will be used as visual punctuation, reminding us of its various significations. The small white ball balancing miraculously above the tumbling waters suggests the fragility of life and the mysterious forces which drive it. The ball could stand in for the human soul. Galbraith has his own interpretation, describing the fountaining waters which keep the ball dancing as being analogous to the forces which move us without our knowledge. This could be interpreted as referring to the subconscious or to supernatural or spiritual forces – a matter of belief and worldview. The interpretation of symbolism is ultimately a personal matter and may serve to reveal much about the reader. Certainly it gives a retrospective insight into Galbraith’s psyche (or soul, if you will) which at this point is untainted by murder but is evidently inclined towards the introspective. 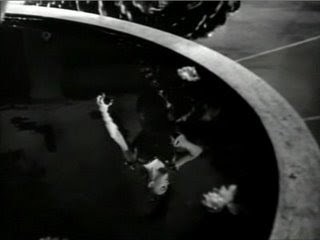 The original script described Clo-Clo’s night club dance routine as being first seen reflected in the waters of the fountain’s basin, but a tight shooting schedule rendered this shot unfeasibly complex. It’s another indication of the water’s connotation of transience and fragility though. The water could stand in for the shadowy bars cast upon the walls in I Walked With A Zombie, here with its intimation of a reflective just beyond that of surface appearance, peripherally glimpsed through the intuitive lens of subconscious perception. Rather than the visual image, it is the signature sound of Clo-Clo’s castanets heard over the shot of the fountain which draws the parallel between her, the embodiment of life, and the transience of the tumbling waters and their tenuously suspended dancing ball. When she sees the leopard, led in by Kiki with Jerry ushering her on from behind a curtain, she immediately knows what is going on; she can see the calculation behind the act. Her startling of the leopard with her castanets is a confrontation of opposing forces; The castanets, which provide the rhythm for the dance of her life, daring the dark power of destructive chaos to take her on. It proves unequal to the challenge, and the leopard pulls free from Kiki’s grasp and runs into the night. It is significant that it is Jerry who has bought the leopard into play, urging a reluctant Kiki to carry out his plan. If he is indirectly responsible for the first death and Galbraith is culpable for those which follow, then the leopard stands for the loosing of a malevolent male wave of violence upon the female world. Kiki and Jerry have unleashed forces over which they never had real control. A waiter bears the three-furrowed scar of the leopard’s slashing claw, one of the workaday people who have to face the consequences of such casually used power.

The following police search introduces us to Charlie How-Come, ‘The Leopard Man’ from whom Jerry has hired the beast. He is a Native American (an Indian here) and thus adds a third layer of ethnic history to the New Mexican landscape: Indian followed by Spanish followed by American. This layering of histories is an important subtext of the film. The museum is a central thematic locale and is where the climax of the film takes place. The procession which ends the film is also an annual act of expiation, a commemoration of the savage incursions of the Spanish Conquistadores. The massacre of the powerless by those with exponentially superior force is reflected by the events which unfold over the course of the film, set in course and, as we shall see, perpetuated on this occasion by American men.
The scene in which the humane police chief Robles, Charlie and Jerry discuss the leopard hunt is interrupted by the arrival of Clo-Clo, once again heralded by the sound of her castanets, this time with a note of mocking triumphalism as she waves them in Jerry’s face.

We then follow Clo-Clo as she walks along the town street. She is used as a bridging character in several scenes, emphasising the close connections existing within the community. Here she confidently treads the well known pavement, greeting everyone she passes with a personal exchange betokening a knowledge of and interest in their lives. Clo-Clo is something of a dual character, however. A vivid personification of the spirit of life, she also carries with her something of the night; a faint aura of death. The sound of the castanets could be the dry sound of rattling bones, as musically represented by the xylophone in Saint-Saens’ Danse Macabre, his portrayal of the dance of death. When she drops in to see the gypsy fortune teller, she has the first of several card readings which draw a concluding ace of spades, ‘the death card’. This, as the gypsy tells her, can mean different things. It does not initially foretell her own death, but she is the connecting figure who seems to identify those who are about to meet their ends, as if she is passing that card on. She is there at the window greeting Theresa Delgado just before she closes it and is told by her mother to go out for cornmeal. She is given a flower by the maid who has just bought them for Consuela Contreras, who will go out to put them on her father’s grave. Finally, the card is not passed on and accurately foretells her own fate.
Posted by Jez Winship at 00:16