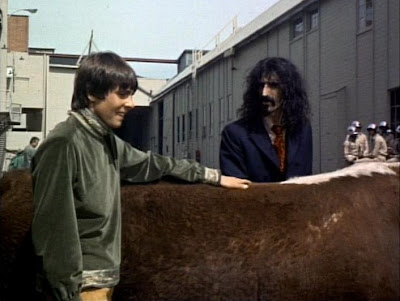 The Monkees’ film Head is a great favourite of mine. In its schema, and in the Monkees character set up as a whole, Davy is the cheeky, down to earth character as opposed to Mickey’s goofball, Mike’s cool hipster, and Peter’s innocent dreamer. It’s him who notices, as they are guided through a semi-automated factory, that something is terribly wrong. Piles of boxes tumble off conveyor belts, people fall from overhead gantries, and workers turn into dummies whose heads fall off. When the boys find themselves trapped in a dark box during the course of the freeform, pop surrealist nonplot, Peter takes the opportunity to repeat his guru’s pontifications on the nature of reality, sitar sounds twanging in the background. He ends this piece of standard eastern mysticism with the ego denying statement ‘why should I speak, since I know nothing’. Davy suddenly snaps out of the dreamy torpor into which they’ve all drifted and looks incredulous. ‘You mean to say we’ve been sitting here listening to you and you know nothing’, he spits, his Manchester accent coming to the fore. ‘I’ll show you how to get out of this box’, he says, getting up and kicking it down. He also gets to go head to head with Sonny Liston, a clear mismatch which unsurprisingly sees him going down on the canvas within seconds. In the film’s multi-layered structure, which encompasses scenes of its own making, he gets to choose who he’s going to go into the ring with in the fight scene. Walking along the line-up backstage, he stops at Liston points to him, cheerily saying ‘great, I’ll have a go at him’. Asked why he’s made the choice, he says ‘he looks like a nice guy, and I like his smile’. Liston is stony faced throughout.

Davy’s star turn in the film is his dance with Toni Basil for the song Daddy’s Song. It’s an old-timey number, with a swinging brass arrangement and infectious tune. Davy looks dapper in a white tail-coated suit with ruffled black shirt, which flashes into its black suit and white shirt negative as the song progresses. Toni Basil is dressed in flared trousers and waistcoat, and arranged the dance, and the two work fantastically together. It’s a great number. Afterwards, Davy wanders out into the studio lot, where he bumps into Frank Zappa, whose leading a large cow. Frank was a big Monkees fan, having no truck with the San Francisco hippies’ angry derision surrounding their inauthenticity. He also lusted after their top of the range equipment. ‘The song was pretty white’, Frank comments. ‘What can I tell you’, Davy reasonably points out, ‘so am I’. Frank congratulates him for having evidently worked on his dancing, before admonishing him, saying ‘it doesn’t leave much time for your music, though’. Frank tells him that they should work on it because ‘the youth of America depends on you to show them the way’. It’s an unlikely encounter between two people seemingly at opposite ends of the musical spectrum at the time. But maybe they weren’t so far apart after all. You can read Davy Jones' Guardian obituary here.
Posted by Jez Winship at 09:50