This Was Tomorrow at the Spacex Gallery 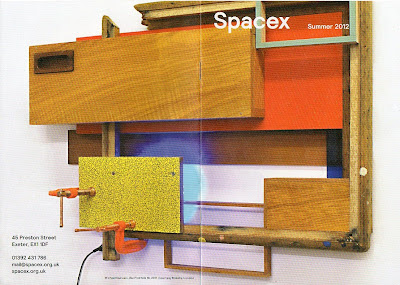 The new exhibition by Michael Samuels at the Spacex Gallery in Exeter, This Was Tomorrow, makes explicit reference to the famous This Is Tomorrow exhibition staged at the Whitechapel Art Gallery in 1956. A major contribution to the show was made by the members of the Independent Group, including Eduardo Paolozzi, Peter and Alison Smithson, and Richard Hamilton. Artists, architects and graphic designers formed groups to create displays in discrete zones. Its renown as one of the key moments in post war British art resides in its heralding of the pop art age which paint the 60s in bright primary colours. Richard Hamilton, who collaborated on a display with John McHale and John Voelcker, installed a large promotional lobby cut-out of Robbie the Robot carrying a limply unconscious woman in his segmented alloy arms in classic pulp SF cover style (the Robbie of Forbidden Planet, a passive slave Caliban, would never do anything so lasciviously aggressive, of course). He/it towered like a futuristic metal colossus over a cut-out of Marilyn Monroe in her classic hot vent pose from The Seven Year Itch, and a full scale model of Robbie himself was on hand to welcome visitors to the gallery. The best known work associated with the exhibition is, appropriately enough, a promotional poster produced by Richard Hamilton for his group’s sector. Just What Is It That Makes Today’s Homes So Different, So Appealing is a collage which gathers together almost all of the elements which would characterise British pop art, almost amounting to a manifesto. Included in this parodic ‘ideal home’ are comic strips, commercial ads, American movies and cars, television programmes, pin-ups, domestic appliances and, represented by a reel-to-reel tape recorder, music. The word ‘pop’ itself appears on the wrapper covering the succulent head of a sweet lolly, which the Charles Atlas muscleman grasps firmly and suggestively. 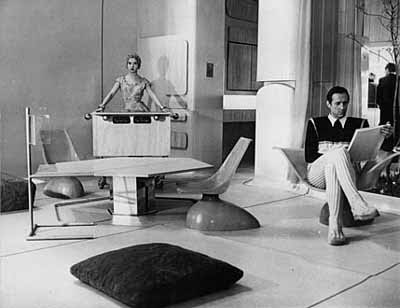 Relaxing in the house of the future

Also included in the exhibition were the architects Peter and Alison Smithson, both leading members of the Independent Group, who collaborated with Eduardo Paolozzi and Nigel Henderson. A few years earlier, in 1952, they had produced a design for the Golden Lane Estate due to be built on the northern edge of the City of London, and incorporated cut outs into their drawings. Amongst the ideal inhabitants were Marilyn Monroe and Joe DiMaggio, and their monumental plan with its linear grid of flats drew on the scale and asceticism of certain examples of American abstract expressionist art. In the same year that they exhibited at the This Is Tomorrow show, they also created a ‘house of the future’ for the Ideal Home exhibition at the Olympia in London. This is a retro-futurist’s dream, all moulded modular furnishings, hexagonal tabletops, pod-like chairs, irregular cave-entrance doorways, gardens indoors, and corrugated iron interior walls, with inhabitants dressed like extras from Things To Come for the publicity photos. The Smithsons would go on to pioneer the Brutalist architectural style (an unfortunate name purportedly deriving from Peter Smithson’s nickname Brutus), which would change the face of so many British towns and cities in the 60s and 70s. Their careers culminated (or ended) with the Robin Hood Gardens estate in Poplar in the East End of London (which I have written about in a previous post), a building which is still hugely controversial. Some (mostly fellow architects such as Richard Rogers and Zaha Hadid) want it listed, many more would be happy to see it demolished. It certainly generates strong opinions on either side of the divide. In many ways it can be seen (along with the Alexander Road Estate in Camden) as marking the last dying gesture of post-war British modernism, a defiant gesture which could almost have been designed as a seplulchral monument. The title of Samuels’ exhibition, with its sense of futures past, also feels like an epitaph, a marking of an era which is dead and buried. 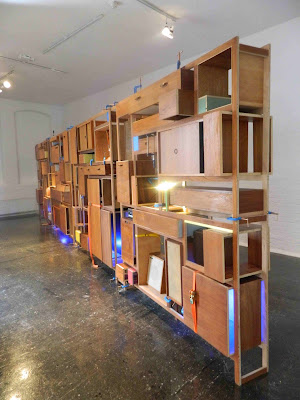 The Tragedy of the Commons

The major work in the exhibition is called Tragedy of the Commons, a title taken from the 1968 article by the ecologist Garrett Hardin which put forward the idea that land or resources open to unrestricted use will, in the nature of things (or in the nature of human self-interest) become degraded and depleted. It could be extended metaphorically to apply to the failure of the utopian ideals espoused by the likes of the Smithsons which lay behind large scale public housing schemes in the post-war period. It’s certainly constructed on a similarly monumental scale, stretching in a tall and narrow line to fill the central gallery space. Looked at from the far end of the gallery it offers an impressive prospect, with diminishing lines of perspective suggesting a potential extension into greater distances. Michaels has constructed it from broken down elements of utilitarian modernist furniture, mostly cupboard doors and cabinets, which are fitted together, modular style, to create a larger structure. It brings to mind the large estates of the sixties and seventies, like the Smithsons’ Robin Hood Gardens or the Park Hill in Sheffield. The use of colour in the interiors of the partly opened drawers, in the lighting, and in the straps (orange and yellow) and g-clamps (blue) attached at various intervals to break the monochrome brown veneer, along with the overall rectilinear pattern link it to artistic precedents such as Mondrian, Ben Nicholson and Picasso and Braque’s early cubist works. As such, it also follows the way in which the Smithsons drew on artistic influences as an inspiration for their architecture. Michaels adds further dimensional variation to the surface by having some of the drawers open to different degrees, echoing the way that modernist architects would vary the face of their buildings by having windows or balconies of different sizes, or set at staggered intervals. The Brutalists favoured exposing the workings of their buildings, not hiding their functionality, something which the Smithsons put into practice in their first completed building, the Hunstanton Primary School. The influence of such a philosophy can be seen in the Pompidou Centre and Richard Rogers’ Lloyds Building in London, both of which proudly hang their guts on the outside for the world to see. In Samuels’ work, the straps and g-clamps which appear to be holding the whole structure together could be seen as a reflection of this tendency. They also could be seen as a kind of scaffolding, holding together a worn-out, unstable construction in an ad-hoc fashion which doesn’t inspire a great deal of confidence. The spectre of Ronan Point, the shoddily put together high-rise one quadrant of which completely collapsed in 1968, rears its head at this point. 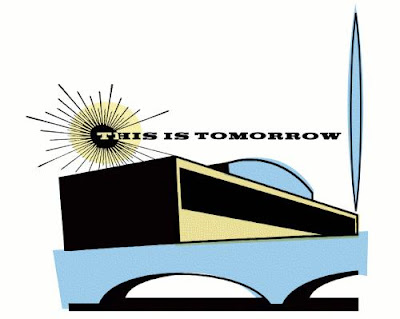 Angle poise lamps perch in nooks at various heights, their crouching, acute angled frames breaking up the generally right-angled grid of the whole. A classic Habitat design, they show a brighter, more domesticated face of modernism which reached out to a broad spectrum of the populace, and was more accommodating to pre-existing tastes than the ascetic, doctrinaire approach of the Smithsons. The lamps are switched on and, in the fairly shadowy space of the gallery, provide what could be seen as the day side of the building. Walking behind, into the shadows cast by its looming height and expansive length, you enter the nightside, the largely featureless rear of the building lit with a nocturnal blue. Some of the open ‘modular’ spaces in the front are filled with old speakers of appropriate size and fit, with a smaller, horizontal aperture housing an eight track tape player. These hint at an inaudible soundtrack, associative songs which the viewer can play in their head. This Is Tomorrow by Saint Etienne, the song they wrote for their own paean to post-war modernism, a film about the Festival Hall, would seem a particularly apposite choice. This implied music draws on the link, via the Independent Group and the This Is Tomorrow exhibition, between the Smithsons, Brutalist architecture and pop art, which was always closely linked to music, both in its inclusion of pop stars amongst its iconography, and later through the design of album covers (Peter Blake’s for Sergeant Pepper being the most famous). It’s a sculptural installation which is full of rich associations (yours may be entirely different, of course) but which is also absorbing and impressive as an imposing object in its own right. 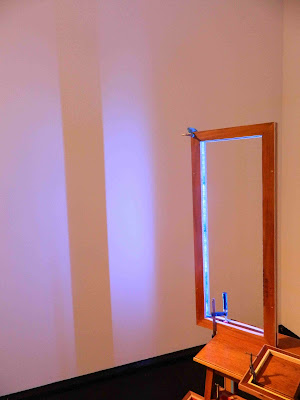 Other works in the exhibition are inevitably on a smaller scale. On the wall in the central corridor are two small assemblages, Die Fraktale 14 and 15, once more created from drawers and fragments of utilitarian furniture, which have a Mondrian or Ben Nicholson-like blend of square shapes and sparely used colour. Both have slots through which a blue light shines, adding a further element of radiant colour, and include g-clamps both as an exposure of the materials of construction and as a part of the composition. In the smaller gallery there are three pieces, Metronome , Portal and Metabolist. The first, Metronome, although it feels more like a portal, is an open frame clamped to a table surface, its inner rim limned with blue light. Other smaller frames, with inner surfaces painted blue, green, yellow or red, are laid out flat or positioned horizontally, like a three dimensional projection of an abstract painting. The blue light casts a pool of cool monochrome colour onto the white wall, the edge of the frame dividing it with a bar of shadow, creating an amalgam of Barnett Newman and Clyfford Still-style abstract expressionism. The next piece, Portal (Metronome?) balances several long, thin frames on a small stool, and has a tottering, drunken look, as if it might keel over at any moment. As with all three pieces in this room, it casts great shadows, and also reflections in the glossy black paint of the floor. In this case, the shadows look like cartoon outlines of a Metropolis skyline of high-rises. The final piece, Metabolist, looks a little like one of Eduardo Paolozzi’s sculptures in form. Boxes and drawers are accumulated in a chaotic jumble, overarching the small table on which they’re piled. The clamps which hold the elements in precarious balance are like tiny, tyrannosaur appendages sticking out. The title Metabolist hints at a figure possessed of life, the blue light shining beneath the tabletop some sort of energising force. You can imagine it as some sort of surrealist beast, self created out of an office skip, staggering into uncertain motion on its spindly giraffe legs like a stop-motion animated sculpture in a Jan Svankmajer film. 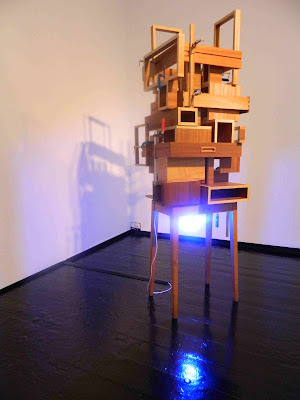 Ready to come to life - Metabolist

This is a thoroughly absorbing and stimulating exhibition, which is well worth coming along to see. I was privileged to get a sneak preview before it’s opening on Saturday 28th July, for which I thank Steve, of Instant Steve renown, and Rowan and everyone else there. Michael Samuels himself will be present for the opening of the exhibition and will give an introductory talk. There will also be a talk on Saturday 8th September by Dr Deborah Sugg Ryan, Senior Lecturer in Histories and Theories of Design at University College Falmouth which will look at the Ideal Home Exhibition between 1926-1956, and discuss the Smithson’s House of the Future. 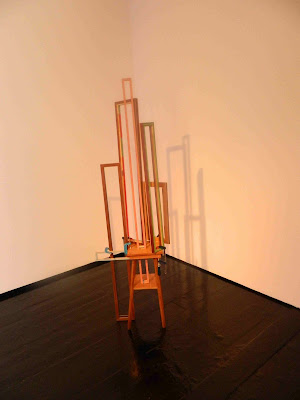