Katy Dove at the Spacex Gallery 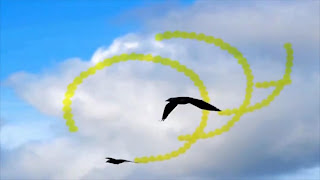 Katy Dove, whose exhibition Meaning and Action is currently on show at the Spacex Gallery in Exeter, is a Glasgow-born artist who combines painting, animation and music to make shimmering patterns and combinations of shape and colour. The centrepieces here are her animated films, shown in two dark, hived off nooks into which you fumble, hands outstretched, before collapsing onto the comfortable sofa. Being thus shut off from the outside world allows for a pleasing sense of total immersion in the images growing and metamorphosing in front of you. 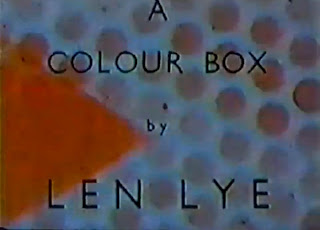 The lower of these two mini cinemas shows three films made over the last decade. The earliest, Luna, dates from 2004, and animates a procession of abstract shapes, sometimes approaching organic form, in a shimmying, polychromatic dance across the screen. At times, it is reminiscent of the films which Len Lye made for the GPO, and relates also to Norman McLaren and Oskar Fischinger’s kinetic studies in colour and movement in the inter and post-war years. Primary reds, yellows and blues predominate. Lines float across with coloured pennants raised, to be replaced or overlaid by small green circles, like peas, which settle into vibrating arrays. They are joined by smaller red dots, which float in contrary motion, making transits of the green discs and juxtaposing colours in a pleasing way (like pimentos in olives). The succession of shapes and patterns provide stimulating contrasts whilst maintaining a sense of coherent development, as if some natural process of transformation were unfolding. Sometimes, the pattern recedes into the haze of blue distances, still shifting like a model of an atomic cloud. Rainbow striations fountain off to either side and there is a shower of black feathers at some point, as if violent revolution had erupted within a parliament of crows. The soundtrack provides a blueprint for those which we will hear on future films, with environmental sound recordings blended with loose group improvisations. Here, insect chirp and, later, the two note hoot of a cuckoo harmonise with drifting voices, moving with a cloudlike, Ligeti-esque lack of fixity, and bell-like chimes. 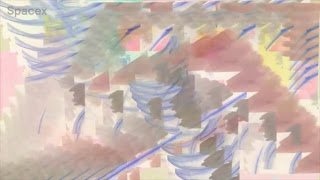 Sooner, from 2007, rhymes with its predecessor, whether consciously or not, lending it a sense of direct connection. It begins with rich, deep colours – purples and blues – across which a knotted spiral turns. A face seems to emerge from the pools of colour, which seep into one another in an edgeless patchwork. This may well be pattern recognition, however, the desire to make something concrete and familiar out of the abstract. The vividness of the intitial colours soon fades into a paler, washed out palette, like a batik died coverlet. Blue lines and curves move over grey cloudlike areas and clumps of earthy brown, giving a sense of landscape reduced to its fundamental elements. The screen is divided up into collaged squares which drift across the screen like phantom cells floating through the aqueous humour of the eye, projected onto the image of the world. Lime green pennants are carried across by invisible marchers, and cut-out Sergeant Pepper-style moustaches bob upside down like stiff-winged birds. Finally, a black and grey veil of horizontal stripes draws across the backdrop, the stage curtain or drooping eyelid descending. The soundtrack begins with looped voice and develops into a tribal chanting and clapping, spontaneous campfire rituals. 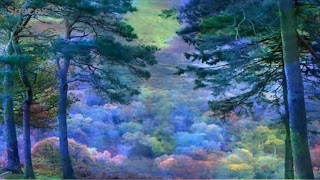 October, from 2011, develops the natural elements of the previous two animations, this time using filmed footage of wild, expansive landscapes. Opening with a scrunched circle of paper or foil pulsing with a sheen of iridescence against a background of clouds, it moves on to a dense weave of pine branches through which the sun palely shines with low horizon winter dazzlement. A red triangle is drawn with an invisible red marker pen, as if delineating angles of solar radiance. In the next scene, an oval of blue sky is roughly cut into footage of a tree-lined hillside swaying in a stiff breeze, the ragged edges making it look even more precipitous. Eyes and a mouth, open in a moue of surprise, are torn out of the sky in leaf, seed and bird-shaped holes, making a mask of sky through which the swaying branches (evergreen and bare deciduous) can be seen, their motion like the nervous alertness of a creature which has strayed from its natural habitat. Protruding branches and bracken and trailing roots cut across the blue of the sky like scars. The forest is banished, and the blue sky claims the whole of the screen. Yellow, dotted circles are traced across its surface, eye-dazed sunspots projected from someone unwise enough to stare at the sun (you didn’t listen to Patrick Moore). The black silhouettes of animated birds flock across this sun-dappled sky, so redolent of summer days which currently seem far, far away. A seascape is overlaid with diamond frames, measuring and framing the chaotic, perpetual motion of the waves, capturing it in prismatic facets. Woods are psychedelicised, soaked in polychromatic ‘raindrops’ which create a sense of vision at once blurred and enhanced, unsuspected spectral dimensions brought out by the rain. This idea of expanded vision is carried through to the final image, in which ‘eyes’ are roughly cut out of a blue sky, and are stained with splashes of vibrant colour, all washed together in two wildly intermixed pools, windows of a vivid and bright soul. The soundtrack here starts with a rumbling drone, over which voices hover, joined and replaced by plinky improv guitar, ripples of zither or autoharp, measuring metronomic ticking and music box or celeste tinkling. It sounded at times a little like the Texan group Charalambides, or even some of the weirder, communal stretches of the Animal Collective. 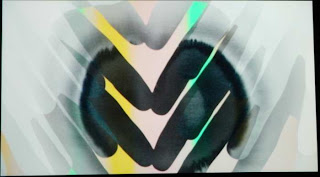 The most recent film, Meaning and Action, from this year (2013), gives the exhibition its title. At the outset, drips of pale colour drip down the blank screen like daubs of liquid paint on an upright canvas, forming an instant abstract colourfield of light pinks, yellows and greens. The outlines of fingers then intrude, like shadow projections on a slideshow screen (he said, showing his age), fingers and thumbs joined to form a directorial frame. A blossoming black nova explodes the coloured screen, which is transformed into a ribbed weave of blue daubs against which leg shadows kick in languid hoofer exercises. Hand and arm snakes dangle in hydra conglomerations from the top of the screen, and swing with the motion of synchronised plumb bobs or cuckoo clock counterweights. An outlined profile pushes into the frame from the left, face flickering with psychedelic light and colour. It is a momentary intrusion into what is essentially a study in the motion of limbs and digits, of shadow, outline and colour. Towards the end, the crooked angles of elbows form a refractive, kaleidoscopic mandala, turning one of the more awkward and ungainly aspects of the body into something sublime. The soundtrack here strikes a more strident tone than the low-key explorations of previous films. A reverb-enhanced electric guitar is hit as much as played, providing scratchy scrawls of sound which sometimes have an air of violence and aggression – like Derek Bailey in a particularly narked off mood. 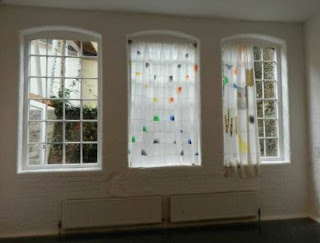 The motion of limbs silhouetted in Meaning and Action is carried through to some of the pictures on display in the main Spacex hall. There are a couple of photographs which record a collaboration with choreographer Sheila Macdougall, music and movement style events in which dancers twirl about trailing colourful lengths of material which trace the trails of their lighter than air motion through space. Works on paper which type out repeated patterns of letters, drawing coloured lines through some of them, resemble both needlework samplers and graphic scores, suggesting tones and musical shades. There are also a couple of paintings, abstract and colourful in a Miro style, and watercolour works on paper which look like backdrops for use in the animated films. The large, church-like windows at the back of the gallery are draped with white curtains decorated in patterns of coloured shapes, which themselves form screens which are illuminated when the sun happens to be shining. This makes for a great effect if you’ve just emerged from the dark screening box – it’s like coming out of the cinema on a really bright day. And today, for one brief moment, the sun did shine through, showing them off to their best effect - as glowing stained glass drapery.

The exhibition continues until 4th May, with a gallery breakfast on the 26th April!

Hi Jez - Terrific review as usual. I must admit that initially I thought the exhibition was a bit thin and that it didn't show much development from its influences and over the period of the works. However, you have made me think again. Katy seems like a lovely person and is part of a band composed entirely of practising artists - How cool is that?