Trembling Bells and Mike Heron at the Exeter Phoenix 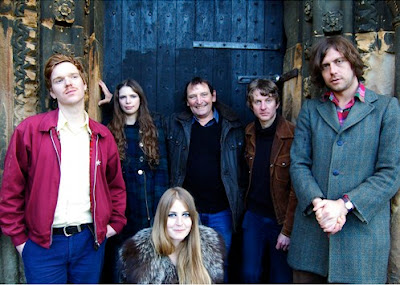 Trembling Bells and Mike Heron stopped off at Exeter last Sunday night to play at the Phoenix during the lengthy wanderings of their 'Circle is Unbroken' tour. This was an exciting meeting of adventurous folk past and present, as well as a coming together of music which meant much to me as a teenager (the Incredible String Band) and a band which is one of my current favourites. I had anticipated a standard evening of two halves, with Mike Heron playing a solo set followed by the Trembling Bells in all their lyrical, electric glory. But this was a much more special occasion which amounted to a celebration of the Incredible String Band’s music, and an acknowledgement by the members of the band of the influence it had exerted on them. It was enjoyable to see the looks of sheer pleasure and enjoyment on Alex Neilson and Lavinia Blackwall’s faces as they sang these songs which had evidently become part of their bloodstream with one of their authors. 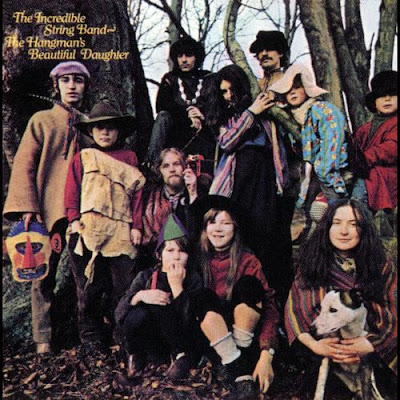 It was actually a Robin Williamson song which began proceedings. Maya sees him in full mystical flow, the lyrics embracing the full spectrum of mythic and religious imagery whilst the music marries east and west with a blend of Western folk and Indian vocal traditions. Trembling Bells lead singer Lavinia Blackwall took Williamson’s sinuous vocal lines and made them her own, her early music background (with its inherent Moorish elements) proving an ideal grounding for the Eastern influenced melismas which twist the ends of several lines into baroque swirling smoke trails. Williamson’s vocal style proved surprisingly suitable for translation into a female soprano register, in fact, as other of his songs which Lavinia sang during the evening proved. Waltz of the New Moon from the Hangman’s Beautiful Daughter album was particularly effective, with Lavinia and Georgia Seddon emulating the harp and harpsichord sway of the original via analogous keyboard sounds. The Cold Winds of February, a standout track from Hard Rope and Silken Twine, the last ISB album (made in 1974) was a real showcase for her soaring voice, Williamson’s writing displaying a significant shift towards traditional Celtic styles. The simple organ accompaniment, overlaid with Nick Pynn’s fluttering penny whistle, created a hushed and mesmerising mood. 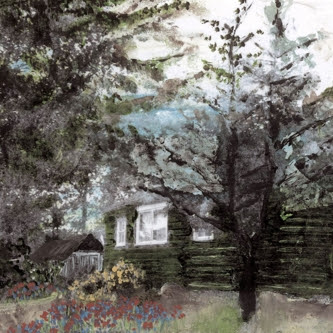 Mike Heron wandered on towards the end of the song, in time to add his voice to the spirited group rendition of the final chorus, appropriately introducing the evening with the refrain ‘all the world is but a play, be thou the joyful player’. He had broken his arm, which hung strapped and immobile at his side, so his participation was limited to the use of his voice, with its distinctive phrasing and seemingly inbuilt optimism. It’s a voice which contains an implied smile, which was indeed present for much of the time. There was no guitar, nor yet any sitar, although I suspect he has long since put that unwieldy instrument to one side. Heron was reasonably adept on the sitar, but his guitar never transcended the functional role of accompaniment to his songs. It was a singer-songwriter’s tool, effectively, with none of the virtuosity of a John Renbourne or Bert Jansch. Heron modestly admitted as much, introducing Mike Hastings with the self-deprecating observation that his replacement was ‘almost as good as me’. Hastings, the more than accomplished Trembling Bells guitarist (who has also played with Heron in other contexts) took up the acoustic instrument, leaving his quicksilver West Coast electric lines for other occasions. This made for interesting variants on the handful of Trembling Bells songs which were played, heard here in what amounted to ‘unplugged’ arrangements. This served to further illustrate the lineage running from the Incredible String Band (whose own attempts to move towards a heavier rock sound tended to be tentative and unconvincing) to the Trembling Bells. The songs which they chose, Willows of Carbeth and I Took to You Like Christ to Wood, certainly have much of Williamson’s richness of imagery and language, although Alex Neilson’s writing tends more towards a wounded Romanticism blurred with booze, and a celebration of the particularity of place (triangulating the personal sacred territory between Yorkshire, Carbeth and Oxford).

Heron introduced the band as soon as he had the chance. His daughter Georgia Seddon sang accompanying vocals and played the keyboard, occasionally also adding a touch of percussion. Nick Prynn played the fiddle, and various other ‘little’ instruments. Whereas the ragbag jumble of folk and world instruments which coloured the Incredible String Band sound was largely replicated this evening by keyboard patches, Prynn brought some of the old spirit to bear on A Very Cellular Song. Its seamless evolutionary transformations between the different song ‘cells’ required him to drop kazoos, whistles and mandolins in order to pick up the violin which provided the interconnecting cell walls. The original sound of the bowed gimbri, which seemed to emulate the erratic buzzing flightpath of a bumble bee drunk on nectar, was replicated on the fiddle through technique alone. Simon Shaw’s bass anchored and wove its counterpoint throughout, slackened tuning providing what sounded like low brass accompaniment for one song. 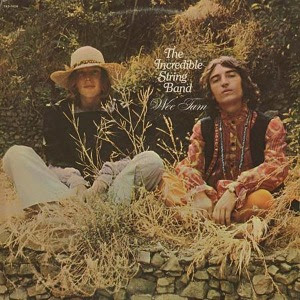 A lot of Heron’s material was drawn from the Wee Tam and the Big Huge double LP from 1968. This was always the Incredible String Band record which most ably demonstrated the sheer range of their stylistic influences, and the wide diversity of their writing. Maya showed Williamson and Heron’s interest in both eastern music and spirituality. From Heron’s contributions, we also heard the Donovanesque folk-pop of You Get Brighter; the down home campfire country of Log Cabin Home in the Sky; the non-conformist hymnal in Air, a beautiful duet between Heron and Seddon; the American spiritual in Greatest Friend; and the mystical ballad Douglas Traherne Harding, in which Heron takes a few steps into Williamson’s territory of esoteric spirituality. Heron’s self-deprecating humour came to the fore once more in his dismissal of the Be Glad For the Song Has No Ending film the ISB made in 1971 as typical incomprehensible hippy whimsy. But the instrumental passage from the credit outro, complete with the opportunity for a joyful group chant-along, sounded great, and was combined with a song from Heron’s first solo LP Smiling Men With Bad Reputations (which Neilson has written about in the special Shindig magazine volume on the Incredible String Band and psychedelic folk). 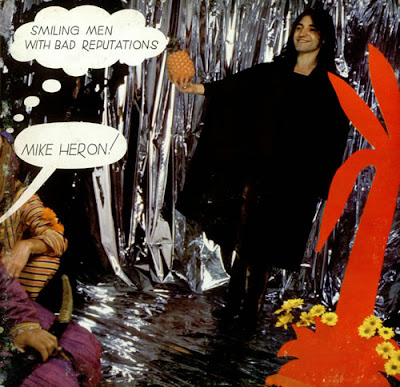 Lavinia Blackwall and Alex Neilson finished the first half with a beautifully harmonised acappella rendition of 7 Years a Teardrop, which originally concluded their debut LP Carbeth. There was more a capella singing, featuring Heron, Seddon and the whole band, on the hymn-like Sleepers Awake (originally on the 1969 LP Changing Horses), which was always a favourite of mine and sounded great on this evening. Little was heard from the ISB’s later years, which was a shame in a way, since Heron wrote some fine songs in this under-appreciated period, particularly on the Liquid Acrobat as Regards the Air LP. Worlds They Rise and Fall, Red Hair or Painted Chariot from that album would all have been good to hear – ones for future collaborations, perhaps. We did hear Heron’s paean to the sanctity of the instant, This Moment, from the 1970 LP I Looked Up. And they all harked back to their first collaboration together in 2010 on Feast of Stephen, originally on Heron’s 1971 solo LP Smiling Men With Bad Reputations. A welcome reminder of winter’s chill on a humid, sultry night, it ended with one of Heron’s irresistible poppy choruses, fa-la-la-ing to fade.

A Very Cellular Song ended the evening on another hymnlike, singalong finale, its repetitive chorus the perfect send-off, blessing us with the lines ‘may the long time sun shine upon you/All love surround you/And the pure light within you/Guide you all the way on. Of course, standard gig form dictated that, appropriate as these would have been as parting sentiments, there was an encore to follow. Heron and Seddon sang an intimate and spellbinding a cappella number, after which the group returned for a cheerful rendition of the one song of the evening drawn from the 5000 Spirits or the Layers of the Onion LP. This was the Hedgehog’s Song, one of Heron’s childlike song’s which look at the world through the eyes of small, anthropomorphised creatures (as in the Amoeba Song section of A Very Cellular Song, and Cousin Caterpillar). It was a good one on which to finish. No one can possibly be unhappy after hearing it, and we all left with a smile on our lips and another of Heron’s infectious choruses circling our minds.

Terrific review Jez - I'm definitely going to investigate the earlier String Band albums - By the way, I've cheated by posting a few photos on my blog and cross-referencing to yours - Hope this is ok! Regards, Steve

Thanks, Steve. It was good to see you there and meet your other half. How strange that we should park ourselves at your table without knowing it was you sitting there. A great selection of photos to remember the evening by (you can find them over here, folks: http://instantsteve.blogspot.co.uk/2013/07/mike-heron-trembling-bells-at-exeter.html) Hopefully might see you at The Rebel, if not before.